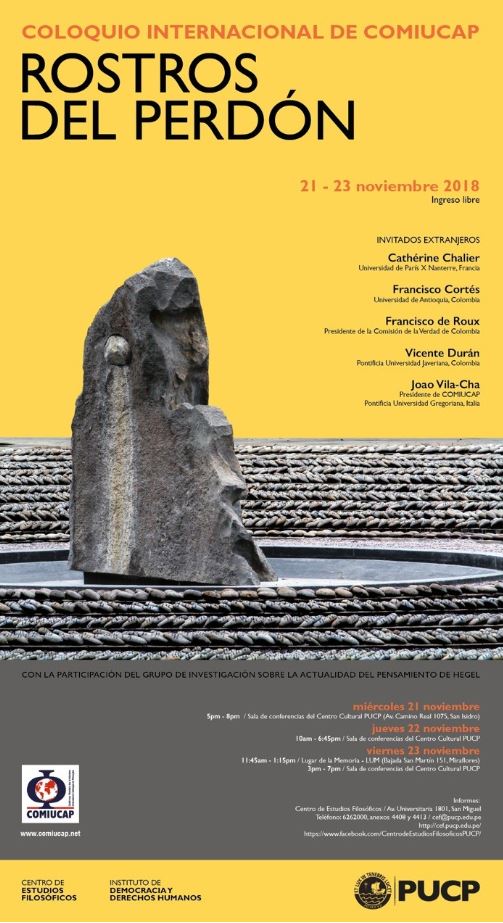 The concept of “forgiveness” – naturally associated with the notions of responsibility, reconciliation, and justice — has lately become specially relevant in the context of transitional justice processes. However, even within its strict application according to the guidelines of International Law, the use of this concept remains highly controversial, for it is unclear in what sense forgiveness can be a subject of collective decissions or agreements. Related processes such as amnesties and pardons are involved in similar controversies. Forgivenes is a profound and complex human experience, which shows different conceptual or metaphorical faces: it has not only the abovementioned legal face, but also a philosophical and theological one. Both of these disciplines exhibit vast theoretical traditions on the matter. These traditions have bestowed precious lessons upon us concerning the meaning and multiple dimensons associated with the experience of forgiveness. Furthermore, there is nowadays a more developed moral consciousness which forces us to consider the non-metaphorical but literal meaning of the faces of the victims of forgiveness.

It was precisely in order reflect on the plurality of the “Faces of Forgiveness” that the Pontificia Universidad Católica del Perú (PUCP) and COMIUCAP (World Conference of Catholic University Institutions of Philosophy) invited Scholars from Latin America and from around the world to gather in the International Conference held from November 21-23, 2018 at the PUCP Cultural Center and at the national museum LUM (“Lugar de la Memoria” / “Place of the Memory”), in Lima, Perú.

The Colloquium counted with the participation, among others, of the following foreign guests: Cathérine Chalier, of the University of Nanterre, France; Francisco Cortés, of the University of Antioquia, Colombia; Francisco de Roux, president of the Truth Commission of Colombia; Vicente Durán, of the Pontificia Universidad Javeriana of Colombia and João Vila-Chã, of the Università Gregoriana and President of COMIUCAP. Many Peruvian specialists also participated in the colloquium, among them philosophers, jurists, theologians, historians, psychoanalysts, anthropologists, writers and people who have lived in the flesh the process of restoring social bonds after the terrible years of disseminated terror around the country. [Program]